On February 10, the first working day of Yuchai Group in the new year, Huang Haikun, Secretary of the CPC Yulin Municipal Committee and Director of the Standing Committee of the Yulin Municipal People’s Congress, visited Yuchai Group to inspect and guide the epidemic prevention and control after work resumption. 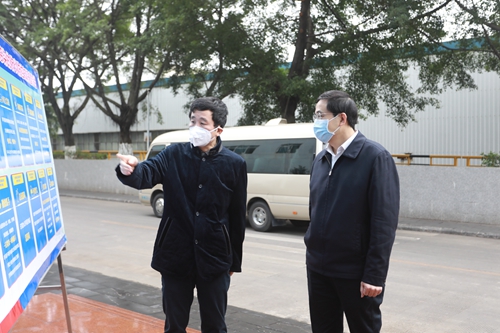 Yan Ping, Chairman of Yuchai Group, reported on the epidemic prevention and control measures and preparations for work resumption of the company. Since the outbreak of COVID-19, Yuchai has earnestly implemented the relevant arrangements and requirements for epidemic prevention and control of the CPC Central Committee, the State Council, and local CPC committees and government departments at all levels, and has formulated a series of epidemic prevention and control measures in a timely manner, thus eyeing prominent results in the anti-epidemic work. Before resuming the work, Yuchai consolidated its preparations for resumption, requiring all branches to make early arrangements, take prompt action, perform their duties, join their hands, and implement scientific measures. Yuchai has also further strengthened the prevention and control measures, and has advanced the internal management during the resumption. In addition, Yuchai has made advance arrangements in detection, screening, early warning, joint prevention and control, public opinion guidance, work supervision, as well as publicity and education, with a smooth and orderly information communication mechanism, to prepare for the work resumption. At present, Yuchai’s branches in Yulin, such as YC Diesel, Yuchai Power, Watyuan, Yuchai Heavy Industry, Jinchuang, and Chengxin, have completed various preparations for work resumption to ensure the stable and orderly production and operation of the company, and the completion of this year’s business objectives.