On February 2, Huoshenshan Hospital was officially delivered, less than ten days after construction began. It is one of the two emergency specialty hospitals in Wuhan City, Hubei Province, dedicated to treating patients infected with the novel coronavirus. As the leader of specialized power system, Yuchai contributed to the construction of Huoshenshan Hospital. 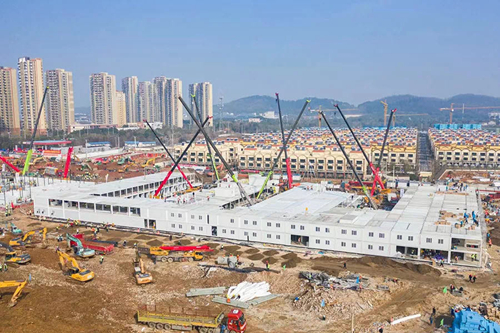 Yuchai provided dozens of 500kW-600kW generator sets equipped with Yuchai YC6TD and YC6C diesel engines for Huoshenshan Hospital that was constructed under the watching of 80 million of netizens through a live streaming broadcast, to provide sufficient power supply for the hospital during construction and subsequent normal operation. Some of the generator sets have been put into use since the end of January as normal power supply before the connection of external power supply, to power the construction of Huoshenshan Hospital. Up to now, they have been in continuous operation day and night without any failure.

In addition to the generator sets, a large number of heavy trucks and various engineering vehicles equipped with Yuchai engines also served the construction of Huoshenshan Hospital, racing against time together with the construction workers to ensure the completion and delivery of the hospital on schedule.

It is reported that Yuchai assigned technicians to perform on-line real-time monitoring for the operating state of the engines in operation, so as to ensure efficient operation of the engines.

In addition to Yuchai's on-site services for the construction of the hospital, Yuchai's service stations throughout the country were on standby 24 hours a day during the epidemic outbreak to ensure safe and rapid delivery of medical supplies by vehicles.