On January 12, Yuchai was in the spotlight of the industry. Yuchai held the Marketing Services Conference 2020 themed by "New Start, High Quality and Great Advancement" at the headquarters in Yulin. At the conference, the company shared its development fruits and released its 2025 strategic planning that it would mobilize and gather all forces to build a strategic alliance, make joint efforts to build Quality Yuchai, Technical Yuchai and International Yuchai, surpass domestic peers and take the first place in the industry of internal combustion engines in China within five years, and develop into the most advanced engine manufacturer in the world within ten years.

In 2019, faced with difficulties and challenges, such as global economic downturn, constant decline of market demand and very fierce market competition within the industry, Yuchai sold 385,000 engines, further improved its product mix and made remarkable achievements in some business sectors and market segments through system reform, transformation and upgrading and synergia of services. For example, the truck engine sector took a turn for the better. It built strategic alliances with major original equipment manufacturers. The sales targeting the strategic customer base increased dramatically and the sales of heavy-duty gas engines with a capacity of 10 liters or above doubled on year-on-year basis. The bus engine sector maintained industry-leading and occupied 57.1% of the market share; the general-purpose engine sector began to rise, with the sales increasing 10.1% on year-on-year basis. The marine & G-drive engine sector took the lead, made new breakthroughs in the oil field and drill engine as well as large junk engine markets and took the first place in the market share. The clean-energy engine sector rised abruptly based on its accumulated strength and realized great advancement in technology and talent reserve. The clean-energy engine was matched in several fields, including those for trucks, passenger cars, general-purpose engines, vessels and generating equipment, and recognized by some regional customers. In addition, breakthroughs were made in the overseas market. The volume of exported engine exceeded 50,000 for the first time, and the number of engines sold in overseas market exceeded 470,000.

The China V and T4 engines in which Yuchai invested billions of yuan, with all performance indicators of the engines reaching world-class standards, began to rise and showed initial success in leading superiority. The products were generally recognized by many domestic main engine plants and totally compatible with products of all mainstream manufacturers. The world-class production line with a total investment of 3 billion yuan was completed, enabling the manufacturing capacity to compare favorably with the internationally advanced level. It made significant achievements in products, supporting, manufacturing and services. At the same time, Yuchai yielded brilliant results in reform and innovation. Yuchai National Enterprise Technology Center ranked 5th around the country and won the best place of the engine industry among the national enterprise technology centers. The major project with the world-class system built together with Huawei realized the phased objectives. The reform in divisional organization was finished, creating a new pattern of all-series divisional organization of the engine industry from parts and components to after-sales service and greatly enhancing the operational capability. A great number of international top talents joined Yuchai, allowing it to be a new pool for the world-class talents. In addition, it further strengthened the opening up and cooperation, made greater strides in the world, enlarged the international influence and sharply increased the comprehensive competitiveness.

Confronted with new opportunities and challenges and shouldering new missions and targets, Yuchai has launched its new journey.

At the conference, Wu Qiwei, President of Yuchai released its 2025 Strategic Planning and proposed the objectives to take the first place in the domestic industry in 2025 and become a world-class enterprise in 2030.

The company is committed to being a leader in the professional engine system around the world, offering solutions to professional engine system which exceed customers' expectations, being a world-class company which has customers and provides services in the world and taking the lead in technology, quality and marketing service. The company adheres to the missions to achieve customer value and power a better future, i.e. create and enhance customer value, facilitate the business success of customers, realize win-win results with relevant parties and jointly share the better future. The company's values are customer-focused and builder-oriented, in pursuit of excellence and innovation and paying attention to rules and process.

The company's operational objectives are to sell more than 900,000 engines and gain more than 60 billion yuan of operation revenue in 2025.

Concerning transformation and upgrading, the company will realize the transformation and upgrading from medium- and heavy-duty engines to light-duty, medium-duty, heavy-duty and large engines, from the domestic market to the combination of domestic and overseas markets, and from the traditional engines to the combination of traditional and clean-energy engines.

The 2025 medium and long-term strategic planning released by Yuchai has further defined the engine family of China VI engines, the technical proposal and development schedule of the second-generation China VI engines, the upgrading and R&D of China IV non-road products, the scheme for the expansion of large marine &D-drive engine market and the development strategy of clean-energy engines. 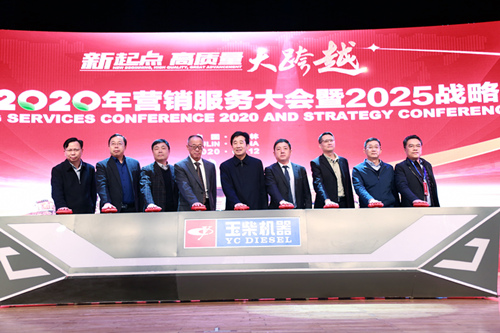 At the conference, Yan Ping, Chairman of Yuchai made a profound analysis on the present overall situation of Yuchai, introduced Yuchai's achievements in reform and innovation in recent years as well as the advantages of China VI, T4 and clean-energy engines, described the grand blueprint that Yuchai would go global and strive to be a world-class enterprise during the 14th Five-year Plan period and expressed the resolution and confidence in accomplishing the missions and realizing the ambitious objectives.

Yan Ping said, main engine plants, big customers, dealers and service offices had gone through storms, made joint efforts and helped each other, experienced a long extraordinary journey and opened up a new world with Yuchai. In the following five years, Yuchai will be customer-focused, adhere to the high-quality development idea, focus on the main business of engines, keep up with the world-class standards, further strengthen the innovation in technology and reform, accelerate the international development, implement the "three transformations and the strategy of high-quality development, and spare no effort to surpass domestic peers and take the first place in China's industry of internal combustion engines within five years, and develop into the world's most advanced engine manufacturer within ten years. Yuchai is ambitious to become a world-class enterprise, so it must have the world-class products, management system and corporate culture.

Yan Ping indicated that Yuchai would vigorously practice its vision and missions, establish the customer-focused value and excellent corporate culture and satisfy the engine demands of main engine plants and big customers through the best attitude, the most excellent products and services. Yuchai is confident in and capable of working with main engine plants, big customers, dealers and service agencies in China and making joint efforts to launch a new journey and realize great advancements and development of all parties.