The morning of January 12 embraced an important milestone of Yuchai. The 9,000,000th and the 30,000th Yuchai China VI engine made a successful rollout as the latest heavy gas engine YCK11N was slowly moving out of its production line. Yuchai, with its courage and responsibility, leaps to the top of the industry with its first breakthrough of 9 million sets of the total production and sales of diesel engines, becoming the largest producer and seller in China's diesel engine industry, and the most powerful leader and promoter for the rapid development of China's power industry. 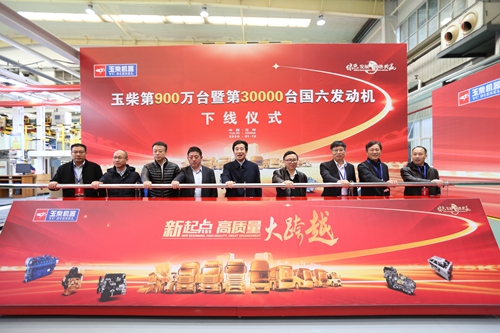 At the newly built production workshop of China VI products, leaders led by Yan Ping, Chairman of Yuchai, and other guests switched on the pushrod together to hug the birth of the 9,000,000th and the 30,000th Yuchai China VI engine. The witnesses of such an important historical moment comprised more than 100 attendees including main engine manufacturers, dealers and key customer representatives as well as over 30 mainstream media such as China Automotive News, Phoenix Satellite Television, China Daily, China Communications News, China Industry News, Machinery and Electronics Business, Commercial Vehicle News, China Buses.com, 360CHE.com, find800.com and Guangxi Daily.

Since the establish in 1951, Yuchai has always closely linked its destiny with China's industrial development, adhered to being a model of China's green power, and constantly innovated, changed and sought breakthroughs. Yuchai is treading its steps to transform itself from a small machinery factory of agricultural implements at the southwest border into a high-end engine manufacturer among the world's first-class enterprises and upgrading its products from monotonicity to variousness covering types of low speed, medium speed, high speed, light, medium, heavy and large. New energy products such as fuel cells, electric drive axles, hybrid power and range extenders are widely playing their roles in fields of trucks, buses, passenger cars, construction machinery, agricultural machinery, ships and power generations. All these achievements make Yuchai a power system solution supplier with the most complete engine type spectrum, the widest power range and the strength of clean-energy products’ R & D, production and manufacturing.

Pioneered by technique innovation, Yuchai has always engaged itself in providing the public with cost-effective and efficient green products. Recently, the devotion into development has contributed qualitative leaps in key technologies of internal combustion engine like ECU, 50% thermal efficiency and B10 lifespan over 1.6 million km. As the only owner of National Engineering Laboratory of efficient, energy-saving and environmental friendly internal combustion engines in the industry, the company also leads the industry to launch China's first engine to meet the emission regulations from China I to China VI, ranking the fifth for its national level enterprise technology center in 2019 and the first in the industry.

Pillared by high quality and sincere service, Yuchai’s products receive increasingly high popularity with customers at home and abroad, expanding the brand power and influence and increasing the production and sales volume. It also segments its market for medium and heavy engineering truck power, power for traditional buses with a length of over 6 m, hybrid power buses, bus gas power, marine & G-drive engines, harvester power, tractor power over 80 HP, ranking at the top of the industry. Today, Yuchai set a new record for the highest cumulative production and sales volume of the internal combustion engine industry in China. The success of the rollout of the 9,000,000th engine further strengthens the determination and confidence of Yuchai to lead the growth of internal combustion engine industry in China.

As a milestone product, Yuchai YCK11N integrates world-class engine technology and makes good use of favorable conditions such as gas-saving economy, strong power, high efficiency and reliability, turning itself into one of the most popular China VI heavy gas engines in the industry. Since the China VI products were introduced into the market in September 2019, Yuchai China VI engine market has been always a great hit. Through realization of comprehensive matching with mainstream automobile groups like Dongfeng System, Foton, Dayun, Shaanxi Automobile Commercial Vehicle, FAW Jiefang Qingdao Automobile and Anhui Jianghuai Automobile, the sales volume of the products has been increasing, ranking in the forefront of the industry, exceeding the annual sales target in advance and leading the industry to accelerate into the China VI era. The outstanding players such as Yuchai China VI high-end heavy gas engines YCK13N and YCK11N, respectively with maximum power of 500 HP and 400 HP, have rapidly become new favorites in the industry for their excellent gas consumption and quality and they also beat their rivals with better reputation, being in short supply in the market. In the first month of the new year 2020, Yuchai China VI engine market continues to heat up and both production and sales receive their first prosperity.

In order to build world-class China VI products, Yuchai completed the production line and put it into operation on December 26, 2019, with a total investment of 3 billion yuan. With the application of the world's most advanced 5G technology, it integrated the world's top intelligent equipment and production line operation mode. Now the overall equipment capacity of Yuchai is at the global forefront and it becomes an intelligent factory with demonstration significance, high degree of informatization and automation in China.