On January 6, Guangxi Yuchai Machinery Co., Ltd. (hereinafter referred to as “Yuchai”) held the Supplier Conference 2020 at its headquarters in Yulin. Yan Ping, Chairman of Yuchai, made a request of general mobilization that all suppliers should be encouraged and gathered to engage in the construction of a world-class supply system and the goal of creating a world-class enterprise centering around the 14th Five-Year Plan. 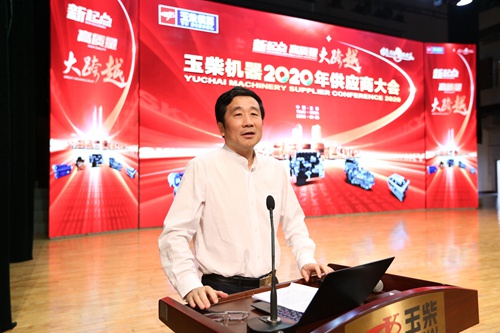 To create an internationally leading brand and enterprise, Yuchai makes it clear that supply chain plays as a staunch force. In 2019, by taking advantages of China VI, T4 and clean-energy engine development and matching, Yuchai has been greatly advancing the construction of its supply chain and introducing a large batch of foreign suppliers to dramatically lift up the proportion of foreign suppliers. Also, Yuchai built up the most powerful order-oriented operation system in the whole industry and improve the order management efficiency in an all-round way to realize 30% up in the supply system management efficiency via supplier optimization, business reform etc,. Meanwhile, Yuchai cooperated with its suppliers in design and development, guiding them to closely catch the steps regarding principles, planing, investment, comprehensive strength and so forth to further meet the international standards, strive to reform and work together to forge the most powerful supply system in the world.

With the great support from and high coordination of suppliers and other parties and after reform and innovation as well as active market expansion in 2019, Yuchai now can show its successful report to the industry and the whole society: the total engine sales volume was basically the same as that in 2018, among which the sales of general-purpose engines achieved an increase of more than 10% on year-on-year basis, more than 50% increase in the sales of gas engines compared with the last year and the sales of marine & G-drive engine remained consistent growth, keeping its leadership in the industry. As for its overseas market, Yuchai also broke through the 50,000 record for the first time, with a year-on-year increase of 14%. By drawing support from the big platform and great opportunity of China VI, T4 and clean-energy engine upgrading, Yuchai made every effort to promote technological innovation and industrial chain reform, target the most cutting-edge technologies in the world, firstly create world-class clean-energy products in accordance with the above standards and continue to lead the technology trend of Chinese industry. With an investment of more than 3 billion yuan, Yuchai comprehensively targeted at international standards to construct an intellectualized manufacturing line at the world-class level from components modelling to engine assembling as well as from design principles, equipment purchase and allocation to technique reorganization. It also built up partnerships with global top enterprises like Huawei to progress a comprehensive reform again and construct world leading operation system from the point of R&D system reform on the basis of previous large-scaled reforms. It also deepened the strategy of “strengthening the enterprise through talents” to solidify the foundation of talent internationalization by vigorously introducing and cultivating a group of international top talents and young blood.

During the conference, Yan Ping made active communication with suppliers including sharing reform and development results of Yuchai in recent years, analyzing the developing tendency of the industry in the years to come and introducing development blueprint and strategic goal of the company in next five years, which all sow seeds of firm determination and confidence in the hearts of suppliers.

Chairman Yan Ping also stressed that the next five years will be the key period for Yuchai to construct the best engine enterprise in the country and the pivotal time to create a world class enterprise. The positioning, standards and requirement on the China VI products will only go up and up again, which needs to be supported by a strong supply system. To deepen the strategic cooperation with suppliers, Yuchai will consistently increase investment, enhance capacity construction of the supplier system and work together with suppliers in development to further improve the quality and delivery capacity of China VI products and meet the needs of customers in an efficient and rapid way; strengthen the management of suppliers, implement the high standard strategic supplier evaluation standard, improve the incentive mechanism for suppliers, transform the original simple business negotiation on cost reduction into the whole-value-chain cost improvement and create the most competitive value system; follow Yuchai's excellent corporate culture to work together with suppliers to create a fair and just competition environment, build up a strategic alliance community that shares weal or woe for mutual benefit and win-win results, and progress and strive to achieve the goal of breaking through the sales record of 500,000 sets of engine in 2023 and 800,000 sets in 2025. At the same time, Yuchai will make great changes in the procurement system, strengthen the planning and control of the headquarters, fully delegate power, continue to introduce a large number of international talents, train a large group of young officials, and distribute 30 million yuan a year for outstanding contributors so that Yuchai, like Huawei, will be full of vitality and competitiveness, and will have a full voice on the world industry stage.

The conference also witnessed a grand awarding ceremony by Yuchai, at which Bosch Automotive Diesel Systems Co., Ltd. won the honor of “the Best Supplier”, the awards of “Excellent Supplier” went to 10 units including Yinlun Co., Ltd. and Wuxi Weifu Lida Catalytic Converter Co., Ltd., 10 suppliers were awarded “Yuchai Quality Prize”, 29 suppliers attained the honor of the “Best Cooperation on China VI”, and 30 individuals were granted the honor of “Excellent Business Manager”.