On December 21,Yuchai officially launched China's first hydrogen-fueled engine for commercial vehicles at Beijing Institute of Technology(BIT).The successful ignition and stable operation of the engine mark a critical step for Yuchai in mastering the key technology for large-scale and low-cost utilization of hydrogen energy.This is another milestone of Yuchai in hydrogen energy application after the release of hydrogen fuel cell and an important step for China's internal combustion engine industry to promote power transformation in the hydrogen energy era,and also marks that Yuchai has become the enterprise with the most conventional engine and clean-energy engine technology routes and the most richest technology reserve in China's internal combustion engine industry. 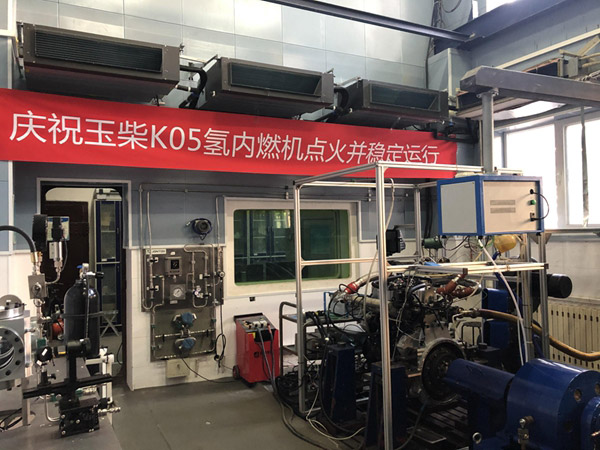 For the YCK05 hydrogen-fueled engine successfully ignited this time,Yuchai has applied a number of advanced special technologies,including high-pressure multi-point port fuel injection(PFI)technology,high-efficiency low-inertia turbocharger technology and high-efficiency lean burn technology,comprehensively optimized and upgraded the engine structure and the individual systems including combustion system and valve system,and overcome technical problems such as backfire and knock of hydrogen-fueled engine.The engine can be widely applied to the fields such as public transport,municipal service,sanitation,logistics and distribution.

Sun Baigang,a professor at BIT who witnessed the successful ignition,said that the thermal efficiency of the YCK05 hydrogen-fueled engine is comparable to the hydrogen fuel cell and even better than some fuel cells on the market.According to Sun,the engine has high utilization efficiency of hydrogen energy and shorter hydrogen filling time compared to the refueling time of a fuel-powered vehicle,has addressed the"range anxiety"of pure electric system,and will usher in explosive growth once the technology is mature and the infrastructure is perfect.

It is reported that Yuchai has carried out technical research and made technology reserves in light-,medium-and heavy-duty hydrogen-fueled engines in order to better meet customers'needs.Yuchai will make full use of its own advantages in the research and development of internal combustion engines,lay a solid foundation for the transformation of hydrogen-fueled engine development technology into large-scale commercial technology,and form a relatively complete standard system for development,testing and application,to break new ground for the realization of China's"two carbon goals".